The grounds of the Victoria School Museum probably haven’t seen this many children in generations. On Saturday night, The Labyrinth Committee held its Harvest Lantern Labyrinth Walk behind the Carleton Place museum and gardens. This was the fourth public labyrinth walk, but the first to be held in the autumn.
As the sun began to dip behind the trees, about 70 people began gathering. Organizers later said a total of about 150 went through the grass maze by night’s end.


“When it’s lit up like this it’s really a magical kind of labyrinth. It’s a very special place,” organizer Debby Lytle said. At times it seemed as though at least half of the participants were children – not so keen on the mediation aspects, but thrilled to be running around at night with handmade lanterns and glow-sticks. 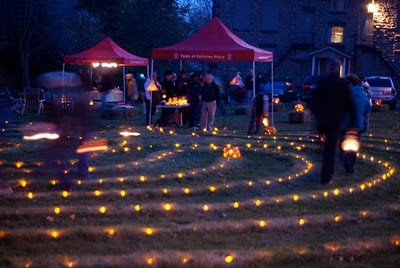 EMC photo by John Graydon
Danielle and Anthony Robinson live nearby and decided to come over and take part. “We’re having a great time,” she said. “It’s beautifully done. There’s a lot of work that went into this . . . It’s the joy of a small town.”

The labyrinth is a path that guides the participant to its centre and back out again. Rather than being a challenge like a regular maze, it’s said the labyrinth is a tool to assist in healing, meditation and personal growth. Organizers said the weekend walk was also designed to bring community awareness to the “beauty and simplicity of walking a labyrinth”.  With Mason jar lanterns and flashlights guiding the way, the many people in attendance seemed to also use the event as an excuse to enjoy the crisp night air and gather with neighbours.  The path itself was outlined with dozens of battery-powered tea lights, jack-o’-lanterns and a nearby bonfire.

Ongoing donations to help support events at the Carleton Place Community Labyrinth are very much appreciated. Contact Christine Hume at 613-859-2136 for more information.